Defying physics with the invention of downdraft ventilation, Lou Jenn forged the path to an open concept and changed the kitchen forever. Founded in that progress, Jenn-Air fearlessly carries his torch- determined on burning down the tired conventions of luxury.

With exceptional performance, masterful execution, and provocative design, Jenn-Air offerings are powerful, yet catering to individual tastes, shattering norms to deliver the progress that today’s luxury consumer deserves. Jenn Air is a part of the Whirlpool family and is viewed as its premium brand.

This Jenn Air luxury 30-inch induction cooktop cooks like gas, looks like an electric, and outperforms both. By converting cookware into the heat source, the induction gives you fast, efficient, and outstanding cooking power.

The four powerful elements heat cookware directly giving exceptional speed and responsiveness while the rest of the cooktop remains cool to touch.

The Jen Air 30 inch induction cooktop has a sensor boil function. This option selects the optimal power level to quickly bring water to a boil.

Once the boiling point is reached, it beeps and then automatically adjusts the power level to minimize the possibility of boiling over.

It has two 7.2 inches ultra-high wattage elements that are linked by a bridge function. The feature offers the flexibility to turn two separate cooking zones into one large cooking zone to accommodate larger cookware such as griddles or poaching pans. 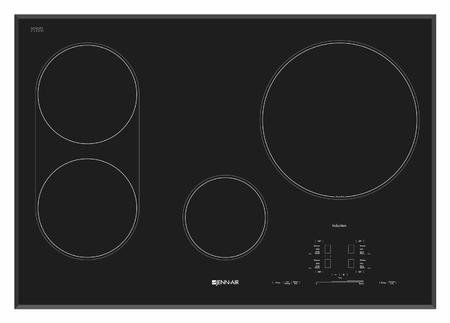 The induction comes with an inbuilt “keep-warm” function. On low settings, each element has this function which may be used to keep cooked food or delicate sauces warm until they are ready to serve. Having this function available on each element allows you to cook food and warm food on the same element.

The induction has four elements in a variety of sizes to match different sizes of cookware for optimal results. Each element has separate timers to easily time several dishes at once.

All the elements also have a performance boost function that quickly heats cookware, boils liquids, and sears meat by raising the cooking temperature above the highest setting for up to 10 minutes.

Jenn Air 30-inch induction has touch-activated controls with a power slider. These controls are activated by the simple movement of a finger sliding across the sensitized surface.

The cooktop has a sensor for Pan detection that detects your cookware before enabling an element. When it is removed, the element automatically switches off.

All the elements have a simmer function and melt function. These functions allow you to cook at minimal power. It gives out low steady heat required for simmering sauces and soups and also for melting butter and chocolates.

The smooth electric 30- inch cooktop has an attractive black glass ceramic surface with digital controls. It has four heating elements with an indicator light on each one.

The size of the left front and left back element burner is 7 inches. The power output is 2500 Watts each.

Both the left burner elements can be bridged. The right front element burner size is 6 inches giving power of 1800 watts. The right rear element burner has a size of 11 inches and gives a power output of 3700 watts.

The bottom right features the control lock button and the bridge button. In the middle of the display panel, there are four heat level displays corresponding to each of the four elements. Each element has a surface cooking area off button, a simmer button, a melt button, and a keep warm button.

There are a timer increase and decrease buttons displayed as + and -ve. Right below the timer button lies the heat level slider with the boost feature on the extreme right.

The induction has a hot surface light indicator feature for each element. It also has an inbuilt automatic Pan detection feature.

From the second year through the fifth year from date of purchase, when this appliance is operated and maintained according to instructions attached, Jenn-Air will pay for factory specified parts for the following components: Electric element, electronic controls, touchpad and microprocessor, magnetron tube and glass-ceramic cooktop, if due to thermal breakage.

It has an automatic pan detection feature. If the system cannot recognize the pan, or if the pan has been removed from the surface cooking area, replace fan animation appears in the cooking area display as a reminder. If the pan is not placed within 30 seconds, the zone will switch off.

The induction is equipped with a control lock that avoids unintended use of the surface cooking areas. When the control lock is activated all keypads are locked out except for the power and on-off button.

The induction has a sensor boil function that selects optimal power level to quickly bring water to a boil. When the boiling point is reached, the cooktop will beep three times at regular intervals.

The performance boost function allows you to increase the heat setting level above the maximum heat setting for 9 to 10 minutes or less.

All the four heating elements have a keep-warm function (low settings), a simmer function, and a melt function. These functions can be used to keep food warm, simmer sauces and soups, and melt foods such as chocolate and butter.

The 30-inch induction has a bridge function that allows you to use two cooking zones as an extra-large cooking zone. This is great for cooking on griddles or for pots having a large cooking area.

The induction boasts of a one-touch off feature. This feature allows you to quickly turn off the cooktop with a single touch. A tone sounds to confirm that the element has been turned off.

The induction is ADA compliant and comes with a two years limited warranty.

What’s not so great

Jenn-Air 30 inch induction does not have smart technology connections such as Wifi, Bluetooth connection, or remote control connection.

The glass-ceramic surface is not fingerprint-resistant. This can cause fingerprints to be formed on the surface that can get messy. It needs to be cleaned frequently.

All cookwares are not compatible with the 30-inch Jenn-Air induction. Only those that are heat resistant, confirm to the specific diameter range and are ferromagnetic work on it.

The cooktop is a bit on the expensive side. Repair and maintenance can also cause a hole in the pocket.

People with pacemakers need to stand at least one-foot distance from the cooktop to avoid interference from the magnetic waves. The distance can make it quite difficult to stand and cook.

Inactivity for 1 minute after the main power has been turned on will automatically turn off the power.

The current power level and the indicator light will flash for 10 seconds then remain on. Touching any other feature or the power slider stops the flashing and information for the keypad that was touched will be displayed.

The power slider consists of 9 positions plus a boost position. when the user slides 0, 0 will be displayed. The surface cooking area will not turn on but remains active.

When the surface cooking area is left at 0 power level for 1 minute, the zone will automatically turn off and displays only the middle – without the indicator light.

Keep warm function keeps cook food warm. The simmer function can be used to simmer sauces. The melt setting can be used to melt chocolate or butter. The boost setting brings the liquid to a boil very quickly.

The indicator light above the bridge keypad will light. The heat setting levels for the two surface cooking areas will default to zero and can be set from a minimum of 1 to a maximum of 9.

Slide a finger on the heat level slider to change the power level up or down.

The selected heat level will show in the heat level display for each surface cooking area using the bridge. To turn off a bridge, touch the bridge keypad for the zone being used.

The surface cooking areas will resume operation as two separate areas. A Point to be noted is that the performance boost is not available when the bridge function is activated.

Use the cooking timer to set times up to 90 minutes. The timer is independent of any other control settings. There is a separate timer for each cooking zone.

The timer will start to count down after a few seconds. when the countdown is finished 00 flashes and a tone will sound.

Touch the on/off to turn off the desired surface cooking area.

One tone will sound when off is pressed. Touch the power button to turn off the cooktop when finished.

Jenn Air 30 inch induction is a luxury to be cherished in the kitchen. Its amazing feature makes a variety of cuisines and cooking techniques possible simultaneously.

With smart inbuilt features, it takes care of the cooking for you. The safety features including automatic pan detection, control lock, and residual heat indicator make sure cooking goes on safely at home.

With a wide range of power settings accompanied by a timer, bring home the awesomeness of perfectly cooked food with Jenn-Air.

Other Induction Stove reviews you may find useful: